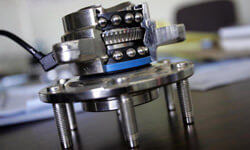 As an invention, the ball bearing doesn't seem all that impressive, but much of modern technology depends on it. Ball bearings make it possible for drive shafts to rotate, for goods to roll along ramps in a factory or store, and for mechanical devices in general to operate. By placing a smoothly rolling sphere between moving surfaces, ball bearings eliminate friction. The idea can be traced back to the Roman Empire, but many historians believe that da Vinci's notebooks contain the first practical designs. Many of the devices that he conceived depend on them and wouldn't have operated without them. Of course, as with many of da Vinci's ideas, the concept was never made widely known and the ball bearing had to be reinvented by someone else.