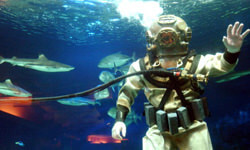 While living in Venice in the late 15th century, da Vinci devised a far-fetched idea for repelling invading ships: Send men to the bottom of the harbor in diving suits and let them cut holes in enemy hulls. Well, maybe that doesn't sound so far-fetched any more. It's fairly common now for frogmen with scuba gear to engage in underwater sabotage. In da Vinci's time, however, the idea was unheard of. Da Vinci's divers would have carried breathing hoses connected to a floating bell full of air, wearing facemasks with glass goggles that would help them see underwater. In another version of the concept, the divers would have breathed from wine bladders filled with air. In both versions, the men would carry a bottle to urinate in so that they could stay underwater indefinitely. Da Vinci's design was not only feasible - it was practical!

These diving suits might actually have been constructed, except that the invaders they were intended to repel were driven away by the Venetian navy before underwater sabotage became necessary.